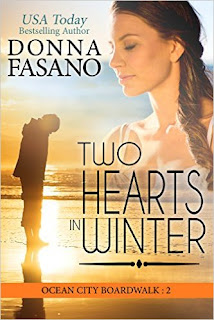 Loss and betrayal have caused Heather Phillips to give up on love. She’s thrown herself into running The Lonely Loon, her Bed and Breakfast located on the boardwalk of . The “off season” in this tourist town is usually a time of rest and reflection for her; however, DB Atwell, a famous author, arrives at The Loon for the winter to finish his long-overdue novel. Daniel, too, has faced grief, and tragedy continues to haunt him. Once Heather and Daniel meet, their lives will never be the same.

Reminiscent of Nights in Rodanthe by Nicholas Sparks, Two Hearts in Winter is a story about learning to let go of the past, about realizing that, though hardship affects us, it need not define us, and understanding that beauty is sometimes covered in scars. The human heart has an amazing ability to forgive, to heal, and to hope, especially when touched by love.

“I loved this book! It pulled me in from the first... kept me enthralled to the end.”

“This is a beautiful book that shows the true power of love.”

Available at regular price in Paperback

Posted by Donna Fasano at 8:59 AM No comments: 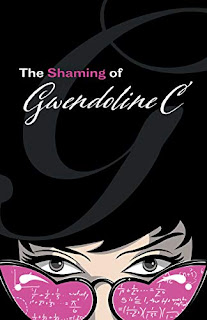 “I gulped. I was helpless – the naked prisoner of a total stranger.”

When her stunning girlfriend leaves to study in Paris, 20-year-old Gwendoline, a math genius working toward her Ph.D. at MIT, is heart-stricken – a void engulfs her heart. Soon after, running alone on an isolated canal-side path, Gwendoline meets, in the most humiliating circumstances imaginable, James, a tough, perverse, astonishingly handsome 42-year-old British millionaire.

This ebook is available as a free read to Kindle Unlimited members.

Look for other books in the Adventures of Gwendoline Series:

Posted by Donna Fasano at 11:04 AM No comments: 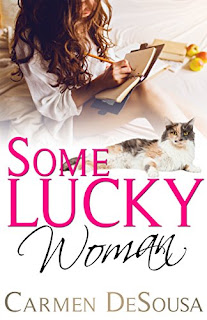 After fifteen years of marriage, Jana’s luck just ran out—right into the arms of another woman. Now she’s determined to make her own luck!

The first thing Jana realizes she needs to do is empty the joint bank account, then she's thinking she might take a tire iron to her soon-to-be-ex-husband's truck. After that, she's not sure what she'll do ... Maybe she'll adopt a cat.

Very quickly, Jana decides she doesn't need a man. A perfectly sized and shaped device and writing about the perfect hero will more than suffice. Determined to share her philosophy, she pens You Don't Need a Man, encouraging women everywhere to go out and experience life instead of waiting for a man to complete them.

Three years later, Jana has a New York Times bestseller and a contract for a movie adaptation, but she also has a shoulder injury, which has put a crimp in her new carefree lifestyle. Worse yet, she can't write. Her only hope is Dr. Adrian Kijek, a renowned physical therapist who hates her simply because she wrote a book about not needing a man, or so she thinks...

What readers are saying about Some Lucky Woman:

“… loved how the story moved quickly and covered five years of Jana's life and her growth to independence. I loved her relationship with her cousin and how smart both women were and how they supported each other…” ~Top 1000 Vine Voice

Email ThisBlogThis!Share to TwitterShare to FacebookShare to Pinterest
Labels: 99 cent ebooks, Carmen DeSousa, Some Lucky Woman, What's Luck Got To Do With It Series

In Name Only? by Patricia Rosemoor #99cents @PRosemoor 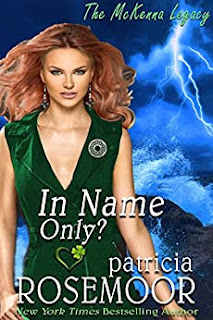 Myth warns that ancient sorceress Caillech lives in the cabochons of her jewels and will take revenge on anyone who wears what is hers. For this very reason, the owner hires jewelry designer Flanna McKenna to make copies. Even so, the woman is murdered and the jewels disappear.

P.I. Michael Eagan is hired to catch a thief—possibly Flanna herself. They agree to a mock marriage as they seek a Traveler who may be the real thief. What starts as a business arrangement soon turns personal. But they must find the jewels before Beltane, for if any woman wears them that magic night, Caillech will return to human form with the power of the sorceress...

“Suspense and spine-chilling mystery keep readers hanging on the edge of their seat throughout this fast paced plot full of intrigue.”

“What a gripping story! I couldn’t put this book down.”

As an Amazon, Nook, and iTunes Associate, Awesome Romance Blog earns from qualifying purchases. This post may contain paid links

Posted by Donna Fasano at 10:32 AM No comments:

Available for 99¢ for a Limited Time Only! 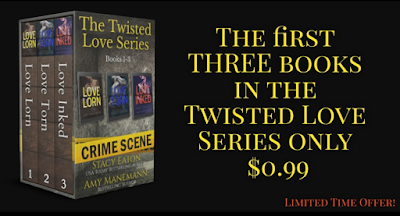 The Twisted Love Series is a continuing Saga of intense police procedurals and romantic suspense. Containing nine books in total, the series delves deep into the world of violent crime and how it is investigated. The crimes continue from one book to the next and could leave you hanging on the edge of your seat until the next one. Not all crimes are solved within the pages of one book.

Now get the backstory and their first combined story all in one place with this 3-book set!

In LOVE LORN…  Determined to prove she’s more than just a pretty face, Detective Evie Harper works hard and trains even harder to be the very best. Her first homicide case will put her skills to the test as she and her partner, Detective Stephen Harris, track a ruthless serial killer terrorizing the west end of town. The Lovelorn killer may be one step ahead of them, but they’re closing in fast — until an immoral decision is made that leaves their partnership hanging in the balance.

In LOVE TORN…  Detective Kali Mann lives by her nickname: The Mann-Eater. She’s a true love them and leave them with no attachments—ever. She a hard-core, to the point, intense detective who takes her job seriously and she doesn’t always play nice with others. When her partner, Keith Harvard, finally gets her to take notice of him, the case they are working goes awry, and suddenly Kali is having emotions she’s not sure she wants. A major part of her past comes back to haunt her and just as she beings to open herself up, her life will be torn apart.

In LOVE INKED…  Detective Kali Mann returns from leave to find a new partner assignment. Not only is she bitter about recent events, but she’s irritated to be saddled with the model-beautiful rookie detective Evelyn Harper. What’s worse, Evie doesn’t just want to be partners—she’s striving to make them friends.

Another brutal Serial Killer is in town, and Evie finds that she has a lot to learn, especially when it comes to her new partner. Evie is not deterred, in fact, she’s determined to fit in and earn Kali’s respect, and maybe calm the waters between Kali and Detective Sergeant Greg Shavers in the process.

As Kali and Evie find their footing and search for clues to the recent murder, an explosion rocks their police family, and Kali and Evie team up with others to find the culprits responsible.

An action-packed full-length novel that takes you through the streets of Philly as you ride-along with Detectives Kali Mann and Evie Harper while they deal with crime, tragedy, and new romances.

“It is a real treat to find a series of police procedurals with a steamy, gritty, real-life type drama such as these. I am really looking forward to the rest of the series coming out.” ~Charles Smith, Reviewer

“This book should come with a warning label that says, *Do not read if you have a heart condition.” ~Rhonda H, Reviewer

Available for Kindle, Nook,Kobo, Apple, and other bookstores.

Email ThisBlogThis!Share to TwitterShare to FacebookShare to Pinterest
Labels: @StacySEaton, Stacy Eaton, The Twisted Love Series, What are the best romantic suspense books?

First Time At This Low Price! Save $9! 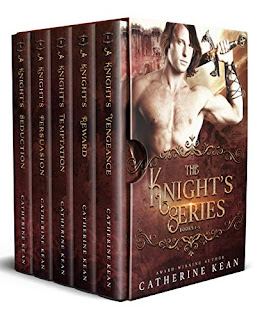 Get the first five thrilling, pulse-pounding romance novels in the Knight’s Series in one ridiculously discounted collection! Under $1 for all five books!

When Lady Elizabeth Brackendale is kidnapped and held for ransom by rogue knight Geoffrey de Lanceau, she vows to escape and thwart his plans to exact vengeance upon her father. Yet the more she learns about Geoffrey, the tormented warrior haunted by father’s killing years ago, the more she yearns for him. Only by Elizabeth and Geoffrey championing their forbidden love can they uncover the deadly secrets that could save or destroy all.

When Gisela Anne Balewyne comes face to face with knight Dominic de Terre, she fears her dangerous secrets have caught up with her. She still cares for Dominic—the lord she loved but lost when he went on crusade—but she can’t ever be with him again, and not just because she’s a commoner and he’s a nobleman. Loving him would mean risking his life.

Dominic is on a mission for Lord Geoffrey de Lanceau: to find out who stole a shipment of costly silks. Dominic is stunned to see Gisela, but as he unravels her secrets, he could lose all that’s dear to him—or win a knight’s greatest reward.

When Lady Leona Ransley sets eyes upon the bold warrior who enters the tavern room, she recognizes him: Aldwin Treynarde, who almost caused her death twelve years ago--and the only man who has ever kissed her. Shocked, she fights her emotions, determined to hand him the stolen ruby pendant, take the reward, and vanish.

Aldwin senses the husky-voiced beauty is more than she seems. She may know the whereabouts of his lord's enemies. She also might be his means to earn what he wants most: knighthood. Taking Leona hostage, he spirits her away. Aldwin desires his captive more than any woman he’s ever met, and when he discovers who she really is, he has one last chance to protect her life. Only by resolving what happened years ago and by fighting side by side can Aldwin and Leona defeat the traitors and surrender to their greatest temptation: love.

When Edouard de Lanceau, son of Moydenshire's great Lord Geoffrey de Lanceau, finds an unconscious wounded woman lying in a river, he's shocked to recognize Lady Juliana de Greyne, to whom he was once almost betrothed. He rushes her to safety, but is captured by his father's enemies. Imprisoned along with the lady, who has amnesia, he tries to find a way to escape and save them both. As their forbidden love grows, will her memories finally return, or will the villains destroy all?

When rogue warrior Tye takes innocent Claire Sevalliere hostage, he plans to seduce her, but soon finds he’s the one seduced, for she brings light to his tormented soul. As battle draws near, and he’s at risk of losing her, he must confront his greatest torment—and his destiny changes forever.

“A wonderful series, which was written so well it kept your interest until the very end of the series. I loved it.”

“The action and romance carry me away. Excellent writing!”

“I have enjoyed this whole series. The characters really draw you in. She is a very talented author.”

Posted by Donna Fasano at 11:55 AM No comments: