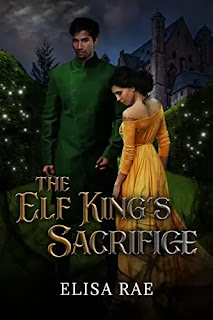 The King of Eldarlan hates parties. Superficial conversations and social niceties never come easy for him. When cursed to host human princesses at a party every night, he considers it mild torture until an unusual princess appears one night. Wrapped in a worn robe with bare feet and tousled hair, she intrigues him immediately.

Kate had been a princess only a matter of hours before being pulled from her bed by a magical spell. It drops her in an enchanted garden populated by silent elves and princesses of various ages. Attempting to avoid the unsolicited advice of her new peers, she retreats to the dark hedge maze where she encounters her host.


The Elf King’s Sacrifice is a light, fantasy romance novella with a romance between a powerful elf king and an unusual human princess. It features friends to lovers amid curses and chronic illness. Also included is a marriage of necessity, an adorable puppy, and a relaxed alpha hero.

“…a cute story with a twist on a classic.”

This ebook is available for Kindle Unlimited Members.

Posted by Donna Fasano at 10:09 AM No comments: