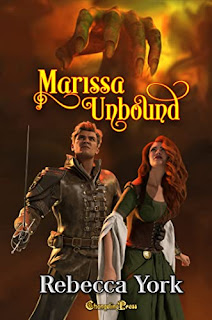 When Marissa learns her abusive husband, Arfon Hanson, plans to murder her so he can take another wife, Marissa flees. She hopes to find sanctuary at the convent where she was educated, but fate intervenes when Steffan Gwinett rescues her from the henchmen Arfon sent to bring her back.

Years ago, Marissa and Steffan had fallen in love, but her father broke off their relationship and sent her away. Their chance meeting rekindles all their old feelings for each other. After they make love, Steffan vows to expose Arfon for a would-be murderer.

Marissa won’t let Steffan take on the dangerous job alone. She disguises herself as a boy, and they begin an investigation of Arfon. They get more than they bargained for when they discover her husband is the leader of a demon-worshiping cult -- and is making plans to offer a child as a sacrifice. Can they rescue the victim and find a happy ever after for themselves?

A master of paranormal romantic suspense, Rebecca York is the author of over 150 books. She is a New York Times and USA Today best-seller.

Look for all the titles in the Unbound Series:

Posted by Donna Fasano at 1:33 PM No comments: