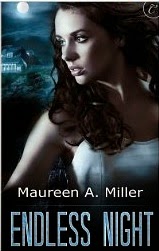 A woman hiding from her identity. A man trying to find his.

After witnessing a murder, Megan Summers ran until she reached the remote coastal . She has a new name, but she knows it's only a matter of time before the murderer catches up with her.

Jake Grogan has come to town to unravel the mystery of his heritage. Instead of finding his grandmother at Wakefield House, he discovers an attractive stranger who will do anything to get him off her doorstep. Trapped by a storm, he's forced to stay the night with Megan—a woman who keeps a handgun under her bed and closes herself off from the outside world.
Jake tries to dig deeper into his past, but he's distracted by his fear for Megan's safety and his growing feelings for her. Danger is drawing near and he'll do anything to keep her safe. Will it be enough to help them survive the endless night?