The Christmas Wedding Cake by @AliciaStreet1 #$0.99 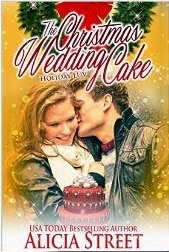 Natalie and Shane were inseparable sweethearts until a pair of mysterious emails tore them apart.

Years later, Shane, who topped the billboard charts with hit songs until his lifestyle landed him in rehab, is out to restore his image and reinvent himself for big screen rom-coms. His agent decides a celebrity cooking show will help clean up his image.

Natalie, now an award-winning master baker with two coffee shops and bakeries, lands a spot as a chef-trainer to a celebrity on the reality TV show BUT CAN THEY COOK?

And guess who’s coming to dinner?

From a 5-star review:

“This is a charming short read about two conflicted souls who have a second chance at love. Perfect for the season.”

Other books in the Holiday Luv series:
Be Mine For Christmas
The Christmas Honeymoon