A Family Affair: The Secret by @MaryCampisi #NewRelease #Series 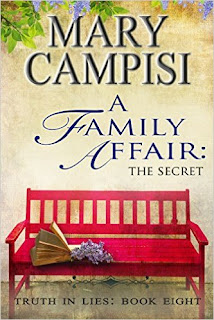 It's time to head back to Magdalena, New York, and spend a little time with the people we love to love and even a few we love to hate.

Roman Ventori isn’t looking for a wife. He’s had one of those and it ended badly. He’s come back to out of duty, not love for the town that drove him away with rumors and judgments.

Angie Sorrento is in to do a job, not find a husband. She almost had one of those, until he dumped her days before the wedding.

Roman’s father has health problems and his last wish is to see his son settled with a wife, a child, a second chance at a life that doesn’t include city life and flashy women. There’s only one person in town who can make the impossible happen. Angelo “Pop” Benito, the Godfather of Magdalena, is the wiliest matchmaker in the Catskills and if he sets his mind to it, an old man might see his wish come true.

Oh, and remember Gloria Blacksworth’s notebook, the one filled with enough destruction to bring down ? Well, it’s causing trouble again, and this time the target is Miriam Desantro… Pop’s going to try to intervene, but he might be too late…

“I love this series!”

Email ThisBlogThis!Share to TwitterShare to FacebookShare to Pinterest
Labels: A Family Affair: The Secret, Mary Campisi, The Secret, Truth in Lies Series