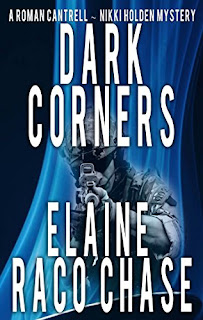 All over south  people are seeing things - things that can't be real - or can they?

Nikki Holden's boss gives her the most bizarre assignment of her career. More than 200 solid citizens have reported sightings and contacts with UFO's! Soon she's on the trail with help from the  Institute & the Air Force!

Roman Cantrell comes to the aide of an old Army buddy and finds himself with the most baffling case of his career. Did the US Army actually hijack an armored car? Or is his buddy feeding Roman a pack of lies?

When their cases converge - Roman and Nikki become trapped in a plot that's stranger than science fiction but as real as death in Dark Corners.

“…the mystery is solid and captivating…” ~Amazon Top 1000 Reviewer

“…thrills and chills galore as the plot points converge in unexpected ways. Nikki and Roman are a match made in heaven and I can't wait for the next in the series.” ~Beach Bum Books