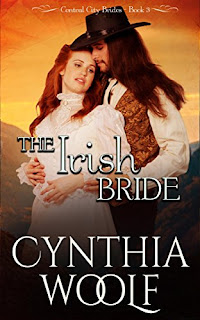 Erin O’Toole is no stranger to violence. Growing up surrounded by one of the most powerful gangs in , learned how to survive. But when her little brother is killed in a gang war, swears she’ll never be part of her father’s world. Desperate to escape the pain of her loss and a future she doesn't want, she risks everything to become a mail-order bride.

After years of being on the wrong side of justice, Henry Jacobs has made things right. Now he is a peaceful blacksmith in Central City in the and all he wants is a wife and children of his own.

One look at Erin, and Henry falls for his feisty new bride. But Henry has secrets that could tear their marriage apart. When a man from Henry’s past threatens his new life, Henry finds he has no choice but to become a man she’ll hate in order to save the woman he loves.

“…an amazing story of a young woman persevering life ups and downs and taking control of her life. Lots of intrigue, fast-paced, and enjoyable till the last page.”

“Loved the first two books in this series and this one is no different!! Great story that kept my attention…”

Other titles in the Central City Brides Series:
The Dancing Bride, Book 1
The Sapphire Bride, Book 2