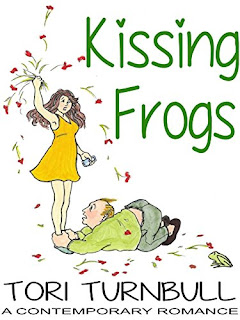 What would you do if your mother advertised for a date for you, on digital-billboards across the London underground system, using a photo only a mother could love and a caption that begged ‘Date My Daughter (please)’?
​
Twenty-nine-year-old Kate Turner gets arrested for vandalism and then blackmailed by her mother and childhood nemesis Mark, into a “serious” two-month hunt for a boyfriend.

It’s turning into mission impossible. She can’t rely on the Underground posters. All she gets from them is a stalker and banned from the underground.
​
Seven weeks of trying every legal method of getting a boyfriend known to womankind and she finally meets Mr Perfect... but is he Mr Right?
​
Kissing Frogs is a laugh-out-loud romantic comedy highlighting the often-hilarious perils of modern dating.
​
Author's Disclaimer: No frogs were harmed in the making of this novel.