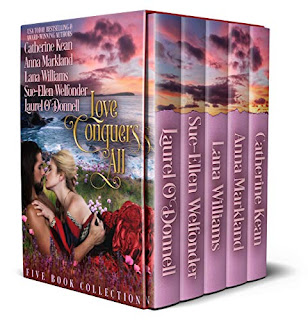 Escape with tales from some of your favorite USA Today and bestselling historical romance authors as Love Conquers All! Included in this collection:

Champion of the Heart by LAUREL O’DONNELL
He is an outcast THIEF known as the Black Fox, vowing revenge against those who unjustly stripped his father of his knighthood and lands. She is the PROTECTOR of the orphaned children of her village, promising to bring the Black Fox to justice for his dark deeds. Can Fox uncover the sinister secrets from their past and become the champion of his lady’s heart?

Master of the Highlands by SUE-ELLEN WELFONDER
A hot-blooded Highland warrior learns that even the boldest hero is no match for the searing passion of the one woman he cannot resist.

Charming the Scholar by LANA WILLIAMS
Passions rise as a reclusive scholar and a charming lady cross paths, each hiding secrets even as they share stolen kisses. Julia is drawn to the solemn lord, wanting to ease the unhappiness she senses deep inside him. Can Oliver release his demons to save Julia or will their secrets keep them apart?

Faithful Heart by ANNA MARKLAND
Destined from childhood to follow his vocation to become a priest, Konrad has lost his faith and no longer believes in God. He becomes a pirate with the goal of seizing ships that carry human cargo. Zara is a successful woman of commerce, mistress of a Venetian fleet. Konrad is drawn to her, but her vessels often transport slaves. She will stop at nothing to protect her beloved ships.

That Knight by the Sea by CATHERINE KEAN
Lady Adaline Mortimer never expected to see Garrett Thurlow, the rebellious young lord she loved and lost, ever again. Yet, when she’s kidnapped and held captive, the dark secrets of the past return. Will she and Garrett win a second chance at true love, or will they perish like legendary lovers before them?

This bundle is available for Kindle Unlimited members.