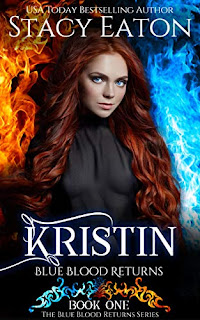 It’s been forty years since the gang was together in Blue Bloods Final Destiny, and many things have changed. Lives have been lost, mates are different, and the breed is on the verge of war. This war isn’t just between the two factions within the vampire race, but now includes the humans who have learned of their existence. With the Mistress, Kristin, at the helm, the tension is growing, and the elders are pushing for a change. The U.S. government wants information on the breed, and Joseph Portage, Kristin’s newest enemy, is lurking in the shadows. Hugh McMurphy heads a task force that is determined to get the vampire race under control and learn what they can do. When Kristin and Hugh find themselves pulled toward one another, the only option is to make Hugh her human consort. It’s not until she tastes his blood that she realizes Hugh is more than originally thought, and with Portage’s men wreaking havoc on the town, she realizes that something drastic needs to happen. Can Kristin and the new gang figure things out before a major transition occurs, or will Kristin and her sister get blindsided by the taste of blood?


Kristin, book 1 of The Blue Blood Returns is an adult paranormal romance
with sexual situations, violence, language, and does contain a cliffhanger
that leads right into the second book, Hugh.