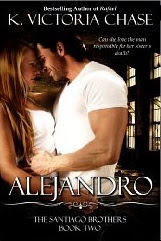 Can she love the man responsible for her sister's death?

Audrey Hughes hasn't heard from her sister Penny in years, but when she receives a letter from her former drug-addicted sister that someone is going to kill her, Audrey believes her sister is being dramatic--until she discovers Penny is dead, and she's left behind a son Audrey never knew existed.

It's his fault she's dead. Lana was his source, his responsibility. US Marshal Alejandro Santiago vows to avenge her killer, a drug trafficker who is the key to finding a dangerous fugitive. One problem: Lana's beautiful sister Audrey and her nephew have just become targets. Can he protect them both without his emotions compromising the mission? What will happen when Audrey learns the truth of his involvement in her sister's death?

An interracial romantic suspense with a bit of faith weaved in.

"Ms. Chase has a a natural talent for writing engrossing books."

"...the characters are three dimensional and accessible, the plot is believable and fun, the action and tension handled brilliantly, and the moral of faith, forgiveness, and second chances flows naturally without feeling forced or tacked on. Bravo again to Chase for crafting an intelligent, romantic, drama, that's sensual, enthralling, and, most importantly, completely clean!"

"LOVE the characters and the series! to read and waiting to see what happens next."