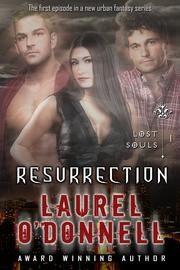 Christian Thompson is killed in a car accident but refuses to pass into the afterlife because of his protective need to shelter his daughter Aurora from her cruel mother. He soon discovers there are others like him, other wandering spirits trapped between the world of the living and the dead. He joins this larger group of Lost Souls in their struggle to destroy the evil endangering their existence.

Unholy creatures threaten both Christian's new world and his old. They are entities called the Changed, beings who were once Lost Souls but who are now dark, dangerous and disturbed monsters. Their ultimate goal is to return to the land of the living by possessing the body of a human.

Little does Christian realize that his decision to refuse his own death will endanger the very life of the daughter he has vowed to protect.

"I really enjoyed LOST SOULS: Resurrection. This story forces a parent to decide to what lengths would you go to protect your child. I am quite impressed with O'Donnell's storytelling... cannot wait to see where this story is going to lead."


"…enjoyed this story. Writing is smooth, characters are interesting and the world is fascinating."

For Kobo, iTunes, Sony and more at Smashwords

Other titles in the Lost Souls Series: