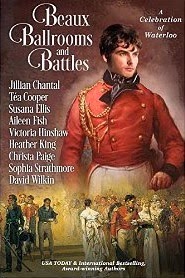 For Readers who enjoy a bit of history with their Romance…

Beaux, Ballrooms, and Battles is a celebration of the bicentenary of the showdown between ’s “Infamous Army” and Napoleon’s Grande Armée. ’s Allied Army consisted of a hastily organized mélange of inexperienced men from several countries who didn’t even speak the same language.

A backdrop of war

While life in Regency England continued much as it had been, the war with Napoleon was a constant source of preoccupation as young men who eagerly set off to become heroes in battle sometimes returned with life-changing injuries or worse, didn’t return at all.

Nine stories of love tested by the trials of war

A collection of sweet Regency stories of courage, hope, and the miracle of love surviving in uncertain times, brought to you by nine distinguished historical romance authors.