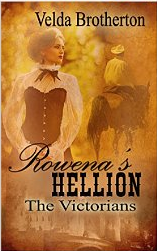 Loving a man damaged by war is a challenge, but Rowena was captivated from the first time she laid eyes on the man her sister was supposed to marry. Something about his haunted eyes captured her nurturing heart. When her sister runs off with an outlaw, Rowena finds herself building a life with this difficult man as she struggles to bring him peace while at the same time adjusting from an English convent to the ways of the U.S. West.

Blair Prescott fights his demons in whatever ways he can—the liquor bottle, wild rides through the night on his favorite horse, anger at anyone and everyone near him. Yet visions of his dead and dying comrades on the battlefield continue to terrorize him, and unexpected loud noises only increase his fears. No wonder he tries to warn Rowena to stay away from him, despite his certain attraction to her.

“…captivates the audience from the first page and takes them on a journey through compassion, fear, disaster, and healing to the ultimate destination—a realistic portrayal of love. If you enjoy historical romances, you’ll love Velda Brotherton’s latest installment in her Victorian series.”

Other titles in The Victorians series:
Wilda's Outlaw