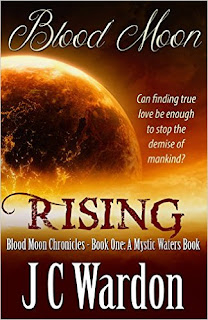 The battle for all mankind has begun!

Riagan Absalom, Prince to the repentant fallen angels commissioned to protect mankind from the master of demons, must find his Destined Mate before she falls prey to those demonic beings determined to destroy all. It matters not that she's hidden from him her entire existence, until her very life is at risk. He must set all that aside and take her as mate as quickly as possible, to fulfil both their destinies.

Adela, first captured by horrible human men who believe her silver blood is theirs for the taking, and then saved by the very one she had sworn to deny throughout her very long life, is in serious trouble. After meeting the angel prince and having every horrible belief she had of his kind confirmed, she realizes she's gone from the frying pan into the fire. She must escape Riagan at all cost! Even if he is visually every fantasy a woman could have, and more honorable in purpose than she, herself, could ever claim.

Blood Moon Rising is the 1st book in the Blood Moon Chronicles.