Knights of the Realm by @ElizRoseNovels 99¢ Kindle Bundle 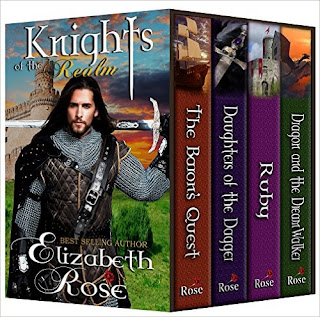 This set includes the following titles by Elizabeth Rose:

The Baron's Quest - Book 1 (Barons of the Cinque Ports Series)

Muriel Draper is a spinster - a woman who spins wool. She is forced to take a job as a personal clothier to the Baron of New Romney, Lord Nicholas Vaughn, in order to pay back her late father's debt. But there is deceit on the docks, and Muriel finds herself right in the middle of the trouble, and also falling for the handsome baron in the process.

Daughters of the Dagger Series Prequel

Mirabelle de Burgh is barren and wants to give her husband - the earl of - many heirs. When she hears the superstition that buying jeweled daggers from a blind old hag will help her to conceive, she lets her wants tempt her into doing something a noblewoman would never even consider.

Ruby de Burgh is chosen by Lord Nyle Dacre (Lord of Death) to be his wife. She is taken back to as a pawn to flesh out a killer.

The Dragon and the DreamWalker: Fire (Book 1, Elemental Series)

Lord Drake Pendragon saves Brynn-Riletta from the sacrificial post as she's about to be offered up to the dragon. He discovers she is an Elemental and that fire cannot harm her, but water can bring about her death. She also has the ability to dreamwalk - leave her body at will. He needs her help to stop the dragon as well as right a wrong from his haunted past - but it isn't an easy task when the woman already hates him.

“Sigh… oh, my…” Debbie B, an Amazon Customer

“I highly recommend this set! If you're looking for a new author and love medieval then you definitely need to pick these starter books up in this set. They are fast paced and fun reads.” AW, an Amazon Customer