Not The End of The World by Gerry McCullough @Gerry1098

A comic fantasy novel
set in the not too distant future 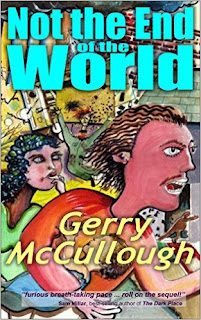 Merc Swingly is a young, naive employee of one of the seven multi-national companies that now control the world through figurehead politicians. When Merc dreams that the world has come to an end, he is instructed by a weird creature who calls himself a Third Degree Representative to go back and prevent this happening.

Sometime in the future, who knows how far away, all the things which people have been dreading and issuing warnings about for years are beginning to happen.

Planet Earth has finally become one political unit. Its capital city is called Nexus Luxuria. Luxury, after all, is clearly the thing most people have been aiming for all their lives.

Life has developed in an almost exactly similar fashion to the threatened forecasts – global warming, over-use and exhaustion of fossil fuels, a third world with slave labour factories, globalization of commerce, a Government with no real power, and a population kept happy by recreational drugs which are no longer frowned on but instead encouraged. In fact, an other-earthly paradise – not!

Oh, and at a guess the future time when all this is happening is about a hundred years ahead of ours.

Or is it only fifty?

From the best-selling author of Belfast Girls.

Also available in paperback in the US and the UK.

Bringing you the best novels available!

Email ThisBlogThis!Share to TwitterShare to FacebookShare to Pinterest
Labels: Comic Fantasy, Gerry McCullough, Not The End of the World