My Once and Future Love by @RuthKaufman #Kindle #Series

Unsung Knights of the Round Table, Bk 1 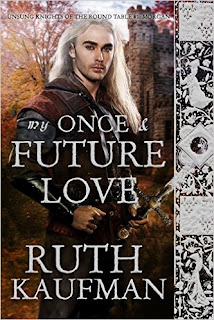 When a lady on the run aids an immortal knight in peril, can love flourish?

Annora of Amberton flees her castle to seek proof that she's not a lunatic as her uncle declared when claiming wardship over her and her lands.

Morgan ap Myrddin must rescue his father, Merlin, from imprisonment. But enemies have wounded him, draining his powers.

He stumbles upon her cottage and enlists her aid. As he helps her in return, undeniable desire and respect spark. But he won't succumb to the lure of a mortal woman as his father did. She's wary of caring for a man who refuses to discuss his past. When he finally tells her he's a Knight of the Round Table, she fears he's the lunatic as danger, secrets and destiny thwart the power of love.

"Kaufman is an excellent storyteller… The characters are intriguing and their insecurities and fears make them seem more real." ~RT BookReviews

"The chemistry between Morgan and Annora sizzles with vibrant energy from every page right along with their strong, compelling personalities… a maelstrom of emotions keeping suspense and anticipations high throughout the steady-to-fast-paced plot full of intrigue, excitement and romance." ~Night Owl Reviews