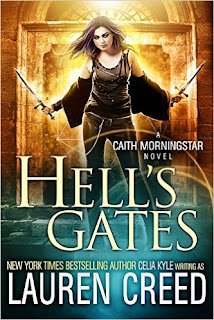 —land of that famous mouse—is on day three hundred sixty-two of my demon ban and life is… boring. Until a demon finds a way around my magical blockade with a new demonic drug. Now humans are getting high and disappearing while tweeners—magical beings that live in the land between On High and Hell—are grinding on my last, violent nerve. When my son is infected with the evil taint, I realize this demon has forgotten my rules: order, secrecy, discretion, and don’t screw with me or my stuff.

Bryony is mine. is mine. This dem’s head? It’s gonna be mine, too.

But, as much as I want to deal with this alone, I can’t. I have to face Samkiel—my fallen angel mate I lost to evil. On High has given him back some of his angelic mojo and I need his purifying hand to cleanse human souls, his help tracking down the local dealer, and him at my side when we locate the dem determined to get his claws into the mouse’s house.

I lost Sam once and survived. The question now is whether I can survive losing both of the men I love most? Or rather, will the world survive?

“The story is amazing, the characters great, and the action non-stop.”


Titles in the CAITH MORNINGSTAR series: