The Color of Promise by @JulianneMacLean #NewRelease

From USA Today bestselling author Julianne MacLean comes the next installment in her popular Color of Heaven Series, where people are affected by real life magic and miracles that change everything they once believed about life and love. 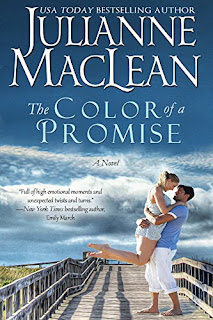 Having spent a lifetime in competition with his older brother Aaron—who always seemed to get the girl—Jack Peterson leaves the to become a foreign correspondent in the . When a roadside bomb forces him to return home to recover from his wounds, he quickly becomes the most celebrated journalist on television, and is awarded his own prime time news program. Now, wealthy and successful beyond his wildest dreams, Jack believes he has finally found where he is meant to be. But when a giant commercial airliner explodes in the sky over his summer house in , all hell breaks loose as the wreckage crashes to the ground. He has no idea that his life is about to take another astonishing turn…

Meg Andrews grew up with a fear of flying, but when it meant she wouldn’t be able to visit her boyfriend on the opposite side of the country, she confronted her fear head-on and earned her pilot’s license. Now, a decade later, she is a respected airline crash investigator, passionate about her work, to the point of obsession. When she arrives in the picturesque seaside community of to investigate a massive airline disaster, she meets the famous and charismatic Jack Peterson, who has his own personal fascination with plane crashes.

As the investigation intensifies, Meg and Jack feel a powerful, inexplicable connection to each other. Soon, they realize that the truth behind the crash—and the mystery of their connection—can only be discovered through the strength of the human spirit, the timeless bonds of family, and the gift of second chances.

“…has all the magic of the rest of the series, and then some. Add in a really fascinating plot, interesting characters… and some things that will wow you, and we have another winner…”

“Another scintillating and emotional look at fate and the mysteries of life and love.”

Find other titles in The Color of Heaven Series

Email ThisBlogThis!Share to TwitterShare to FacebookShare to Pinterest
Labels: @JulianneMacLean, Julianne Maclean, The Color of a Promise, The Color of Heaven Series