My Champion by @GlynnisCampbell #FREE for Kindle Nook iBooks and More! 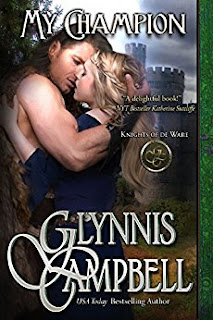 The Knights of de Ware...From a long line of legendary warriors come three brothers to carry on the rich and powerful de Ware legacy:  the Champion...Holden the Warrior...Garth the Hero...

Sir Duncan de Ware is a sworn champion of the common man and a master of disguise. So when he finds plucky maiden-in-distress Linet de Montfort facing off against a notorious pirate, noble Duncan goes undercover to come to her rescue, despite her insistence that she can take care of herself. When the pirate abducts her, Duncan and Linet are caught up in a breathless adventure of danger and romance on the high seas. And soon Linet realizes her only hope is to trust her mysterious hero—with her life and her heart.

“Glynnis Campbell is a gifted new voice, and My Champion is a breathtaking story!” ~Tanya Anne Crosby

Other titles in The Knights of de Ware Series:

Email ThisBlogThis!Share to TwitterShare to FacebookShare to Pinterest
Labels: @GlynnisCampbell, Glynnis Campbell, My Champion, The Knights of de Ware Series