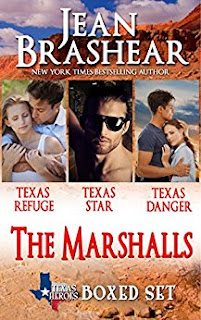 See what the sexy, gorgeous will do for the women they love! Three emotional, suspenseful stories from New York Times bestselling author Jean Brashear.

This boxed set includes all THREE emotional western romance stories of the sexy, gorgeous Marshall brothers—one deeply private, one world-famous—and their equally captivating bad boy cousin, each in his own way, a woman's dream lover…

REFUGE
Still haunted by failing to save his sister, the last thing former homicide detective Quinn Marshall wants is another woman to watch over when his brother asks him to help a friend. Soap opera star Lorie Chandler has already lost her husband to an obsessed fan, and now her son is the madman’s new target.

While the police hunt the killer, Quinn's rugged ranch is the ideal hiding place for Lorie and her child. Neither Quinn nor Lorie expects the explosive heat or the powerful emotion that flares to life in his canyon refuge, yet there is no future for them and both are painfully aware that their time together can only be temporary. When the stalker finds them, Quinn's sole focus is on keeping Lorie and the boy he's come to love safe, even though his success will mean that he will have to give them up to a life where he cannot belong.

STAR
Sexiest Man Alive Josh Marshall is on his way home to when he rescues a woman on the run. In contrast to the many women crushing on him all over the world, this woman does not trust him and wants nothing to do with him, seeking to escape every time his back is turned.

Elena Navarro is running from an abusive husband with criminal ties. Terrified to trust anyone, she finds Josh's tender care a miracle, but his fame and celebrity status could be a death sentence for them both. When echoes of a shared past life threaten, Josh questions his sanity, but he's a white knight to the core and cannot stop trying to help her, even at the risk of his life.

DANGER
rancher Case Marshall is driving a truck instead of his hell-raiser Harley after a crooked partner nearly bankrupts his Flying M Ranch. socialite Samantha St. Claire never dreamed she'd be on the run from the mob--or that she'd find her white knight at a truck stop. Their worlds couldn't be less compatible or their attraction more high-octane…but there are dangers and shocking secrets to battle before they can dream of a future together.