Free for #Kindle! A 2-Book #Regency Bundle by @BarbSilkstone 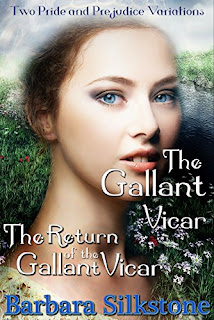 Elizabeth Bennet considers the handsome new vicar at Hunsford parsonage to be everything Fitzwilliam Darcy is not. The Reverend Francis Martel is warm, accessible, and has no difficulty showing his feelings for her. Within weeks of rejecting Darcy’s offer, finds herself swept up in a tumult of emotions for the vicar. He shares her wit, her caring for others, and the simple life—so in her confusion, she accepts the vicar’s proposal. Will Darcy recover from his injured ego in time to intervene in their marriage? And how will he separate the couple only days before their wedding? The Return of the Gallant Vicar is the sequel to this adventure in angst, which though not canon, allows the characters to remain true to the originals.