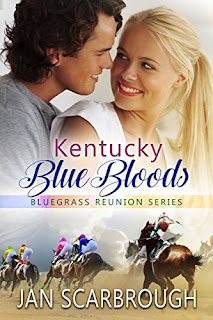 Book 2 of the Bluegrass Reunion Series

Regina Ward, granddaughter of Corbin Ward, breeder of multiple stakes winners, had blood as blue as anyone in . But what her grandfather had built, her father had gambled away. He’d already lost four prized horses to an arrogant, infuriating Brit. Reggie isn’t about to lose her heart to him as well.

Caretaker to his family’s thoroughbred racing empire, Parker Stuart has zero tolerance for anyone who slights him or his blue-blooded British family. Reggie may have considered their brief, torrid affair no more than a spring fling, but she’d run off with Parker’s heart when she’d dumped him. Now it’s time to settle the score.

It’s up to Reggie to save what’s left of her family homestead and her proud heritage. But when Parker shows up to collect his horses, all bets are off. Reggie’s never been a gambler and Parker despises losing. But when blue blood tangles with British blue blood, are they willing to take a gamble on love?

Bluegrass Series: contemporary romances about second chances set in the Bluegrass of Kentucky that can be read as standalone novels with happily ever after endings and no cliffhangers.