What Matters Most by @BarbaraLongley #NewRelease #Kindle 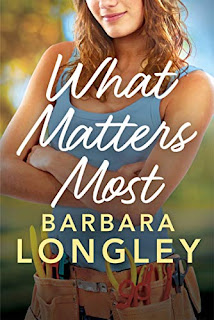 Josey Haney, plumber extraordinaire, ace car mechanic and a fairly competent carpenter, doesn’t deal well with change. With her two brothers wrapped up in their own domestic bliss, and her grandparents recently retired from the family business, Jo feels left out and adrift. When she meets William Prescott, the mutual attraction is instantaneous, but she’s blue collar and he’s white collar. In fact, he’s so far out of her league their ballparks aren’t even in the same state. Still, she needs a date for her brother’s wedding, and Will is available.

William Prescott is in the midst of a crisis. Representing multi-national corporations and crushing the little guy has brought him great success, but at what cost? He’s dissatisfied with the direction his career has taken, and working seventy hour weeks leaves him no time for socializing. He’s on a two week staycation to recover from burnout. After which, his ambitious, driven parents expect him to return to his career with renewed, shark-like vigor. When Josey Haney shows up to unclog his bathroom sink, she lights a spark within him that could lead to major life changes. When she asks him to be her date for her brother’s wedding, he’s all in . . . if Josey is willing to agree to his quid pro quo terms.

William charms her family and proves he can fit into her world, but it’s another story for Josey. His pretentious parents remind her of everything she isn’t, and old wounds are opened. Can the high octane lawyer and the sexy plumber forge a Cinderella story, or are they heading for a Romeo and Juliet heartbreak?

“…satisfying and realistic… a great story.”

“…the perfect ending to the Haney family saga.”

“The chemistry between William and Josie came right off the pages… just phenomenal.”

Email ThisBlogThis!Share to TwitterShare to FacebookShare to Pinterest
Labels: Barbara Longley, Romantic Comedy, The Haneys Series, What Matters Most