Demons Are A Girl's Best Friend by @AEJonesAuthor #NewRelease 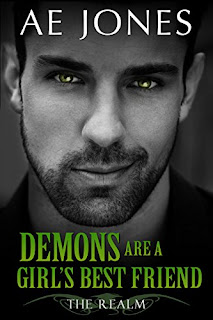 Book 2 of The Realm series.

Aleksei Chesnokov is one busy demon. Between leading the immigration team to bring realm demons to earth and preparing to one day succeed his father as clan leader, his priorities and current project plans do not include finding a mate.

When his clan is attacked by the very demons he’s trying to help, Aleksei must enlist the help of Naya, the leader of the realm guard. A strong, determined, frustrating female, she challenges his decisions and acts before she thinks.

As they work together to stop an impending war, Aleksei is drawn to Naya and the world she protects. When she’s taken hostage, Aleksei will move earth and the realm to save her. Because with all his agendas, checklists, and timelines, the one thing Aleksei never planned to do was fall in love.

Demons Are A Girl’s Best Friend is the second book in a Mind Sweeper spin off series. If you like romance with a side order of mystery and a dash of humorous hijinks, then you’ll love this series by Golden Heart® winner and RITA® finalist AE Jones.


The Realm (Mind Sweeper spin off series;
however it can be read as a standalone series):
Demons Will Be Demons (Misha) – Book 1
Demons Are Forever (Sergei) – Book 3

Email ThisBlogThis!Share to TwitterShare to FacebookShare to Pinterest
Labels: @AEJonesAuthor, AE Jones, Demons Are A Girl's Best Friend, The Realm Series, What are the best paranormal romances?