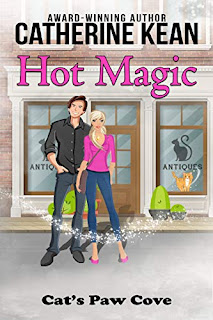 While clearing out her late mother’s home in Cat’s Paw Cove, , Molly Hendrickson finds an unusual antique necklace. Wearing it makes her feel confident and sexy—things she hasn’t felt since her ex broke off their engagement or, really, ever. She decides to keep the jewel but takes other items to Black Cat Antiquities, the local antique store, to have them appraised.

Lucian Lord, a reincarnated 12th century knight, moved to Cat’s Paw Cove after a scandal in which he revealed his magical abilities to his former girlfriend. Demoted by his superiors, he’s running the antiques shop while his grandfather is on vacation. But, when Molly brings in artifacts tainted by dark magic, Lucian is duty-bound to find and contain the dangerous energy before it wreaks havoc not only on the town, but the world.

Living by the knightly code of honor, Lucian vows to help Molly, especially when he realizes the necklace is the source of the ancient magic he’s hunting. He’s determined to save his headstrong damsel and redeem his tarnished reputation—but first, things will get very, very hot.

“I absolutely loved this story.”
“This book was hard to put down ! I liked it so much!”
“A lighthearted book with a good storyline and great characters. Looking forward to reading more.”

Look for all the titles in the Cat’s Paw Cove Series:
A Witch in Time, Book 1
Her Homerun Hottie, Book 2
Gambling on the Artist, Book 3
Meows and Mistletoe, Book 4
Hot Magic, Book 5
Reimagining Mr Right, Book 6
More books coming in 2020!