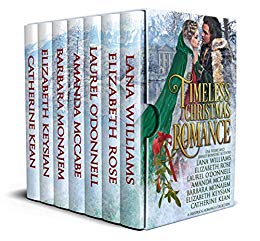 Take a break from the stress of the holidays and spend this season with your favorite USA Today and Bestselling historical romance authors. This set includes:

Wishing Upon a Christmas Star by LANA WILLIAMS – Violet jumps at the chance to recreate a past Christmas for the elderly couple next door, but the unexpected arrival of their son, Baxter, threatens her plans. Can a wish on a Christmas Star give this unlikely pair a memorable holiday and the start of a perfect future together?

Silent Knight by ELIZABETH ROSE – Born with a twisted leg, Alexander Masterson doesn’t let that stop him from being a mercenary. But when his dying father reveals a secret to him about his lineage, Alex decides he needs to know the truth. Being challenged, life isn’t always filled with friendly people. But when his travels bring him face to face with Lady Charlotte Ashworth, he gets a chance to live the life he’s always dreamed of. However, before he can find true happiness with another, he needs to come to terms with himself about his secret past.

A Knight Before Christmas by LAUREL O’DONNELL – Blamed by her father for her twin sister's death on Christmas Eve, Lady Eve Chandos agrees to marry a man she does not love to please him and appease his years of wrath. Betrayed by his brother at an early age, Sir Gabriel Bedford decides it is time to make amends and attends his brother's marriage, but he is unprepared for the beauty Lady Eve has grown into and the attraction that quickly sparks between them. As Christmas approaches, can Eve and Gabriel find the happiness they seek, or will the secrets of their past doom them to remain apart forever?

Upon A Midnight Clear by AMANDA MCCABE – A once-handsome naval captain has vowed never to show his scarred face again. But when he encounters a Jamaican beauty on the stormy cliffs of , something stronger than magic will draw them together....

The Christmas Knot by BARBARA MONAJEM – It’s bad enough being a destitute governess, but far worse that Edwina White’s new employer is the man who lied and deceived her years before. Richard Ballister’s estate has a ghost and a curse, and if that’s not trouble enough, the new governess is the woman who spurned him for a richer man. Can Richard and Edwina overcome the bitterness of the past in time to unravel a centuries-old knot and end the Christmas curse?

A Midwinter Wager by ELIZABETH KEYSIAN – How do you fight back when your stepsister blackmails your fiancé into marrying her? Get snowed in, perhaps, or lose a wager. Or even spend the night in a haunted room. What could possibly go wrong?

One Knight’s Kiss by CATHERINE KEAN – Days before Christmas, Lady Honoria Whitford buys a book to add to her collection. Lord Tristan de Champagne is Intrigued by her love of romantic tales, but refuses to risk his heart again. As Christmas mischief unfolds, so does the book’s secret—one destined to bring peril but also love.

This collection is a free read for Kindle Unlimited members.