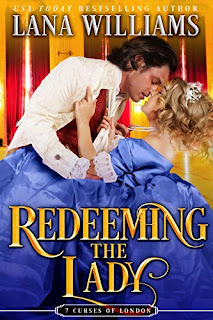 Romance, mystery, and adventure set on the dark streets of London...

Only half of Gabriel Sloane’s blood is blue. The other half is black from the coal dust his mother removed daily as a housemaid. Despite his poor upbringing, Gabriel is now a partner in a successful gentlemen’s club, no thanks to his father, the Duke of Rushford, who’s never bothered to acknowledge him. When a fire destroys a warehouse in his old neighborhood, Gabriel is the first to offer aid. But his pockets aren’t that deep, and more donations are needed. Appeals to charities go unanswered, driving him to commit a bold act.

Lady Samantha Brown has made the right friends, joined the right charities, and attended the right balls, all with an eye on obtaining a marriage proposal from Dallen, heir to the wealthy Duke of Rushford. But she’s come to realize she doesn’t like the person she sees in the mirror. Nor is she sure she likes Dallen. But the pressure to marry well leaves her with few options.

When a masked highwayman steals both Samantha’s ring and a kiss, she’s determined to get back the ring—but can't forget that heated kiss. A chance encounter grants her wish, and she finds herself intrigued by the handsome thief. He’s nothing like she thought and sees her in a different light than anyone in her narrow world, making her believe she has the power to change and make amends for the past.

Together, the pair decide to unmask charities that waste donations, only to find a surprising passion in each other’s arms. Gabriel knows the beautiful lady doesn’t belong in his world, and when his half-brother Dallen asks Gabriel to step aside so he can have Samantha, Gabriel must decide how much of a risk he’s willing to take for love.

“I enjoyed the book…”

“Great story and I would recommend it to others.”

Though this book can easily be read as a stand-alone, most readers prefer to read the Seven Curses of London Series in order:


Trusting the Wolfe, a novella
Loving the Hawke, Book 1


Charming the Scholar, Book 2
Rescuing the Earl, Book 3
Dancing Under the Mistletoe, Book 4
Tempting the Scoundrel, Book 5
Romancing the Rogue, a Regency Prequel
Falling for the Viscount, Book 6
Daring the Duke, Book 7
Wishing Upon A Christmas Star, Book 8
Ruby's Gamble, a Novella
Gambling for the Governess, Book 9
Redeeming the Lady, Book 10