A New Release in the Saints of San Diego Series 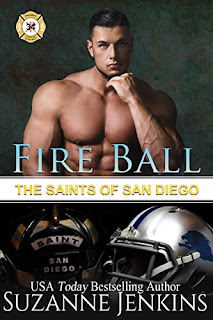 A career in the NFL or join the local fire company with dad? The final choice is made when Oliver Saint meets trauma nurse Wendy Adams and her dog, Sadie.

Being drafted by the NFL is the realization of a goal for Oliver Saint. The handsome, muscular college junior has the choice of either accepting a position as a bona fide NFL player or becoming a fireman like the rest of the Saints. Although he has the greatest respect for the job of first responder, he just can’t see himself living a life of service to his fellow man. Is he wrong to want the accolades a professional sports career could offer?

To make matters worse, his high school sweetheart doesn’t want him to leave California as a draft pick. But Oliver isn’t sure he likes the idea of her following him across the county. He dreams of the full experience of living in his own apartment in a strange city—an exciting adventure that doesn’t include domesticity.

Then all his plans blow up when a serious injury on the field brings trauma nurse Wendy Adams into Oliver’s life. She’ll change everything for Oliver and help him to make a final choice.

“The Saints melt my heart.”

“…yet another 5-star winner from Suzanne Jenkins!”

Kindle Worldwide
This book is available as a free read for Kindle Unlimited members.