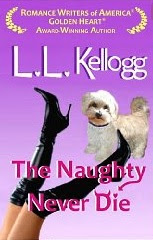 If the good die young, then New Jersey's virtuous First Lady should be a cinch to kill. Unless....deep down she's really quite naughty.

Since her mother's untimely death, crusader Josephine Callahan has served as New Jersey's First Lady. Acting as her father's official hostess in the governor's mansion is tantamount to living in a fishbowl, which makes S-E-X extremely difficult. On the brink of a nervous breakdown, frustrated Josie loses her usual good sense along with her cool and lets her assemblyman boyfriend sweet-talk her into an impromptu romantic getaway--something she would never consider if she had a clue someone is trying to kill her.

The Beast--an incurable bad boy who refuses to admit beneath his scars lurks a hero.

A deliberately twisted message, via the governor's spiteful assistant, misleads ex Special Forces officer, DJ Ryder, as to the true objective of his freelance assignment. He's told to, not only track down the governor's classy daughter and hold her in protective custody, but to also teach her a lesson by letting her believe she's been kidnapped.

When Josie discovers the scarred, but still sexy, badass has played her for a fool, she retaliates by feigning a raging case of Stockholm syndrome, teasing the brute until all he can think of is the 'hold her' part of his orders. How can Ryder concentrate on keeping Josie safe when he's busy avoiding the danger she poses to his heart?

"…infused with a healthy dose of thrills. I recommend this for readers who like romance with a bit of an edge."

"Although the romance half of the story is very funny, the book also includes an edgy thriller plot that will keep romantic suspense readers turning the pages. I highly recommend."

Available in paperback in the US

In paperback in the UK