Book 2 of the Janet Maple Series 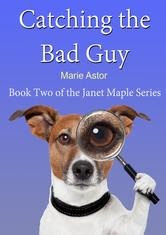 Janet Maple and Dennis Walker make a good team: she is a top-notch white collar crime investigator, and so is he. Both Janet and Dennis are thrown in for a loop when Janet’s treacherous snake of an ex-boyfriend, Alex Kingsley, is appointed as their new boss, and the case that was supposed to be the highlight of their careers is dismissed for lack of evidence.

To make matters worse, Alex is asking Janet to get back together, and the one man she wishes would ask her out sees her as nothing more than a coworker. Janet’s love life soon becomes the least of her worries, as she begins to suspect that Alex’s rekindled interest in her is driven by ulterior motives. She is determined to get to the bottom of things, but she can't do it alone.

Together, Janet and Dennis team up to solve a tangled white collar crime web that leads to powerful politicians and corporate executives. Armed with their keen instincts and skills, Janet and Dennis are bound to succeed. There is just one glitch: both are attracted to each other, and both refuse to admit it. Will Janet and Dennis solve the biggest case of their careers or will their attraction to each other get in the way?

"I read both books, To Catch a Bad Guy & Catching the Bad Guy. Both books were very good. They are real page turner. More Astor is an excellent writer & I can't wait to read the next book in this series, when she writes one."


"Marie Astor wrote another great book! I love the book for beginning to the end! I am so excited that there will be a third book in Janet Maple Series."


"I enjoy the fun, and different mysteries that the main characters always seem to find. Can they ever have a normal life without a mystery? It is a fun and light read that helps you escape."