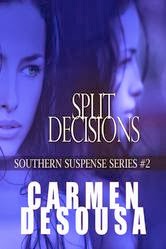 Sometimes you want something so badly you are willing to abandon everything you’ve ever known—including yourself.

Eighteen years ago, Jaynee Monroe married the man of her dreams, became the mother of four, and fulfilled her career goals. About to turn forty, she senses something is missing from her idyllic life. While Googling her name in an attempt to find herself, she unearths something so impossible, she contemplates her own sanity. Seeking answers, she embarks on a journey to discover the truth, only to end up abducted by a deranged stranger who insists on calling her Caycee.

Caycee took the road less traveled. Rejecting a marriage proposal from the only decent man she ever knew, she ventures to California to become famous. Eighteen years later, success has left her alone and miserable. Attempting to locate her lost love on Facebook, she discovers his infatuation with her. Not only does his presumed-dead wife have Caycee’s uncommon middle name, it appears he has photo-shopped her face over hers.

Never could Caycee and Jaynee have imagined decisions they made years earlier would threaten not only their lives but also their loved ones. Caycee must now reunite with the southern gent she dismissed eighteen years ago and convince him to accompany her to New York to locate his wife, the most important person in both their lives.

Email ThisBlogThis!Share to TwitterShare to FacebookShare to Pinterest
Labels: Carmen DeSousa, Romance Stories, She Belongs to Me, Split Decisions