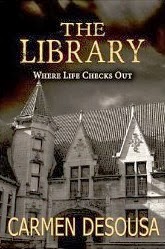 When Mark Waters decided to be a detective, he didn't plan to investigate ghosts.

But as he sifts through evidence of a supposed suicide by train, he learns a murder that took place eighty years ago may directly affect his case.

Six months after the strange occurrences at The Depot, there’s another murder. This time, The Library holds secrets of several murders, and the dead won’t rest until the murderer checks out too.

"…will keep you on the edge of your seat while you make the journey with Mark and Ashlyn. Bravo!"

"The unknown has always been a fascination with me. Carmen was able to pull me right into the story, trying to figure out the "whodunit"! Loved this book!"