From the Gisborne Saga 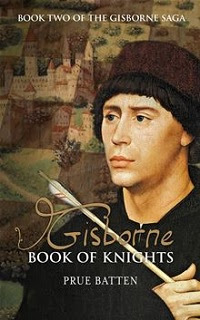 Once Lady Ysabel Ce Courcey had thought that if she had been a trobairitz, she might have written a song about herself – her courage in the face of adversity that would have had the men and women in any noble hall sighing as they listened.

Now, on the eve of the Third Crusade, the denouement of the ballad is beginning…

Ysabel races across the waters of the Middle Sea to seek out Sir Guy of Gisborne because she has vital information that could save a king.

But above all, she longs to tell the wronged knight she values him and will stand back to back with him in a vengeful battle that could threaten all their lives.
What readers are saying:

"I enjoyed [Gisborne: Book of Knights] even more than its predecessor, Gisborne: Book of Pawns. It isn't necessary to have read that book first, but you'll kick yourself if you don't. It's wonderful, too."

"…oodles of atmosphere and the smoothest of writing, which transports you entirely to the Medieval Mediterranean with in-depth research showing in every brick."

Look for book 1 of The Gisborne Saga -- Gisborne: Book of Pawns.