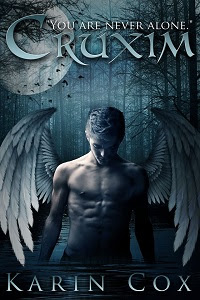 Amedeo is Cruxim, a mysterious, immortal fallen angel. Destined to seek redemption as a vampire hunter, he quenches his insatiable hunger on vampire blood. But when the object of his passion, the novice nun Joslyn, is turned into a vampire and enters a vampire coven, Amedeo's worlds collide. Shattered by the loss of his beloved, he vows to rid the world of vampires once and for all, even if it means destroying Josyln in the process.

A Paranormal Game of Cat and Mouse

Joining Amedeo on his quest to rid the world of the undead is Sabine. Half-woman, half-lioness, she is a Sphinx, a Guardian who has protected humans from vampires since the dawn of time. Yet Sabine comes to this fight pursued by her own enemies. An evil scientist, Dr. Claus Gandler, knows the secret of Sabine's mythological past, vowing to torment her for eternity or destroy her forever.

Captured by the evil doctor, Amedeo and Sabine are paraded as sideshow freaks in the Circus of Curiosities. Only vampire Joslyn has the power to intercede. Will she prove Amedeo's redemption, or his destruction?

"...passion, revenge, action, and love all mixed together to form this story that is unlike any I've ever read." ~Give it to Cupcake Blogspot

"Every so often I'll read a book that is so engrossing, it forces me to neglect EVERYTHING until I finish. Cruxim by Karin Cox is definitely one of those books." ~Eclective Books

"Cruxim is one of the most original supernatural tales I have read." ~Need a Good Read Blogspot