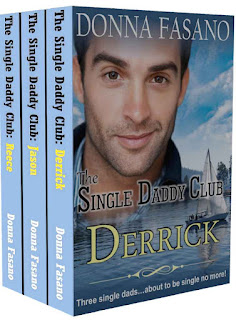 Three bachelor dads are about to be single no more!
Save big by buying the whole series in a boxed set!

The Single Dad:
Ex-military man Derrick Richmond. Solitary and satisfied…until little Timmy was dropped into his lap and Derrick had to learn to be somebody's daddy.

The Single Woman:
Schoolteacher Anna Maxwell. Fate might have denied her a family of her own, but Anna still had plenty of love to give, if only someone would notice.

The Solution:
Anna would teach Derrick all he needed to know about kids. Father and son would give Anna some precious memories. Then the schoolteacher and the single dad would go their separate ways. Unless one little boy figured out a way to make Miss Maxwell become his mom!

Damsel in Distress:
Runaway heiress Katie Smyth. The pampered debutante was about to take on her greatest challenge—her first job…as a nanny.

Doorstep Deal:
Jason was thanking his lucky stars that Katie had shown up at his house. She was the perfect nanny for his little girl—and beautiful beyond belief, leading Jason to rethink his single status. But just wait until he discovered who this nick-of-time nanny really was!

The only remaining single guy in the Single Dad Club, Reece Newton. Marriage may be the answer for his friends, but not for this contented father of one. Of course, the right woman could change his mind…

Endangered Beauty
Woman in hiding, Maggie Dunlap. When someone ransacked her house and put her life in jeopardy, the lovely lady had nowhere to run—except into Reece's protective embrace.

Eventual Bride?
Against his better judgment, Reece offered Maggie a safe haven in his home. Her mere presence changed the lives of father and son more than he ever dreamed possible. But would Maggie ever get the bachelor dad to the altar?

"I love the journeys this author takes us on in each of her stories. They are always realistic, heartwarming and a bit heart-wrenching." ~?wazithinking for The Single Daddy Club: Derrick

"What I like, especially with one of the obstacles is that at first, I was outraged at the character who tried to keep Jason and Katie apart, but then, as it came to light why the character did what he/she did, you can't help but feel a little sympathy for them. I love when characters are not all good or all bad." ~M.P. McDonald for The Single Daddy Club: Jason