Behind a Twisted Smile by @FaithMortimer ~ #Suspense #AmReading 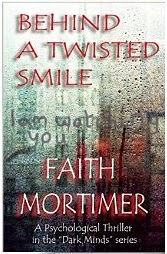 What do you do when an ex-lover won’t take “no” for an answer? Moya thinks Martyn will eventually take the hint – but the rejected lover has no such intention.

Three weeks later, Moya meets her older sister Evie at a picnic, and learns that she has recently met the man of her dreams. Only problem is—he’s Moya’s spurned ex.

Almost at once, Moya finds herself in a long and terrifying ordeal; she has to deal with an adversary who loves playing sinister mind games, all under the guise of his twisted smile.

As the months slip away, the mental battles with Martyn move insidiously towards physical conflict. A conflict where only one person will step away…. Alive!…

“Suspenseful from beginning to end.”