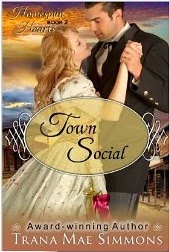 Stuck playing sheriff in Liberty Flats, Jake Cameron impatiently waits for headquarters to assign a permanent lawman so he can return to his life as a Texas Ranger.

Then Sunny Fannin sashays into town, intent on claiming her late-mother's estate and bullying the townsfolk into some semblance of social culture.

At least now, Jake has something interesting to watch.

But, Sunny has no use for a lazy Texas Ranger who spends his days watching the folk from beneath his tipped-down hat. She's on the hunt for her scoundrel of a father, who left her mother to raise her alone.

Then the town's orphaned ragamuffin, who's been Sunny's yammering shadow since her arrival, begins talking-up Jake's 'better' side including the Ranger's ability to protect Sunny from danger.

Can the wisdom of a child overcome the obstacles keeping two opposites from attracting? Only if Jake is willing to help Sunny by betraying a perilous secret.

"...a fun-to-read western romance filled with elements from the mystery genre that make it a very interesting reading experience." ~Harriet Klausner

"[the] small town folksiness and caring will surround you with warmth. Sunny and Jake are living proof that opposites attract." ~Frances L. Trainor, Romantic Times Magazine