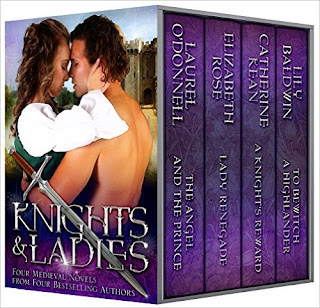 Medieval Bundle of 4 eBooks for 99¢! Titles include:

Laurel O’Donnell - THE ANGEL AND THE PRINCE
In this exciting medieval romance, the French lady knight known as the Angel of Death wages a battle of wills and desires against her dreaded enemy -- the English warrior known as the Prince of Darkness.

Elizabeth Rose – LADY RENEGADE
Storm MacKeefe is a Highlander used to winning his earnings through competitions. When he is tricked into accepting the job of hunting down the leader of a band of renegades, he has no idea the person he’s tracking is Wren – a blind woman who leads a small army of women warriors.

Catherine Kean – A KNIGHT’S REWARD
When a LADY in hiding with her son reunites with the LORD she loved and lost years ago, she fears loving him again would mean risking his life. As the LORD investigates stolen cloth shipments, he uncovers dangerous secrets, including those about the lady. Will he lose her and all that’s dear to him—or will he win a knight’s greatest reward?

Shoney's lightning speed with a bow captures Ronan by surprise, and their chance meeting ends with him lying unconscious at the bottom of a ravine.

When he awakens, he cannot rid his mind of her startling beauty, her valor, or the secret fear he glimpsed in her steel eyes. He vows to find her, but as the mysteries of her identity unfold, his courage and heart are tested as never before.