A New Book In The Popular
Bedding The Bachelors Series 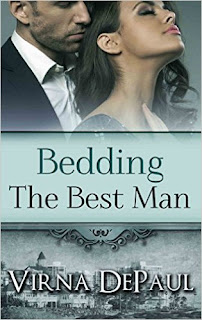 Rough-around-the-edges Gabe Nolan grew up poor in a bad neighborhood and literally fought his way to the top, learning discipline through boxing and earning a college degree. Now the owner of the nation’s most popular chain of sports adventure stores, he enjoys wealth and women, but neither can diminish the pain of losing the girl of his dreams to his best friend.

Brianne Whitcomb is all set to marry Eric, a man who’s perfect for her in every way—except for the fact he’s not Gabe. But Gabe didn’t fight for her when he had the chance, and it’s obvious he views her only as a friend. He’s even agreed to be Eric’s Best Man. Only when Eric fails to show up for the wedding, Gabe takes on a new role: Brianne’s confidante and shoulder-to-cry-on. The more time they spend together, the more friendship turns into an irresistibly tempting passion.

With no idea if or when Eric will return, Gabe and Brianne tentatively explore whether their physical attraction can lead to something lasting. But Gabe’s fear that he’ll never be good enough is the toughest opponent of all. Will Gabe take on the fight of his life to win Brianne’s love?

“…a sweet, endearing story of second chances... I loved this book immensely and highly recommend it!”

“Another amazing book in this series. My heart raced, fell, jumped for joy...I was caught up from the beginning. The characters were amazing. A story that lingers in your mind. I highly recommend!”