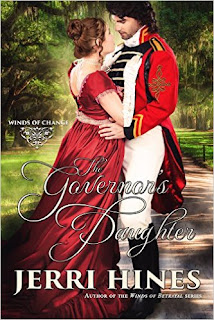 Cathryn Blankenship has no desire for a season in ! Why on earth would her father want her to leave her home in Charles Town? Upon Cathryn’s steadfast refusal, Governor Blankenship is forced to assign a young lieutenant to watch over Cathryn on the journey and ensure his daughter’s appearance in . Cathryn finds Lieutenant Jake Pennington the most aggravating, maddening man she has ever met...a man Cathryn soon admits she is in no hurry to see leave.

But fate has other plans for her in a world she is ill prepared to enter. She descends into a place where love and betrayal go hand and hand, where greed and treachery are second nature, but moreover the threat her father believes he has sent her is awaiting her arrival. When fate tears her apart from her Lieutenant, Cathryn finds herself desolate and alone. Soon, Cathryn makes fateful decisions that will send her back to her home.

A home far different than the one she left. A war rages. Soon, she discovers her life is in danger and the only one that can save her is the one who left her heartbroken.
Find this New Release: