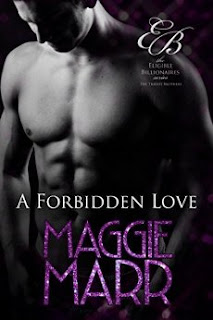 Damon Travati & Ilana Reynolds share A FORBIDDEN LOVE--can they overcome the anger in their past or will their love forever remain forbidden?

Ilana can move from the death of her mother and leave behind the secret of her felon father. She's running her dream business, but when a horrible business mistake puts Ilana's future in jeopardy, she turns to the man that she thought would be her salvation--only to learn that he is a part of her worst nightmare.

After disappointing his brothers, billionaire Devon Travati spent the last year rebuilding his life. He testified against one of the world's most dangerous criminals but he refuses to let the past control him. When encounters the beautiful and mysterious Ilana, he realizes that his life is finally back on track...until the truth arrives on his front doorstep.

Will Ilana & Devon find a way survive the anger that boils between their families? Is Ilana and 's love strong enough or are they doomed to forever have A Forbidden Love?

“…chemistry was fabulous and I fell in love right along with them. Maggie Marr certainly understands family dynamics with the plot of this story, which was a great ending to the Travati Brothers series. A great read.”

“A must read series.”