New Release! Heart Of It All Series, Book 2! 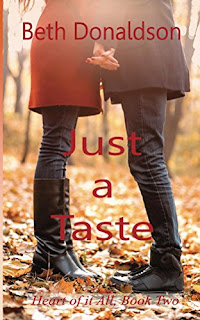 Welcome back to , where the days are getting cooler...and the gossip’s getting hotter.

After nearly twenty years, Matt Slade has returned to with two goals: one, to go into business for himself and two, to flush out the man who fathered him and left him to an abusive childhood. But then he’s propositioned on a Wednesday night by the nicest girl in town and his business suddenly gets…complicated.

So much for acting on impulse. After being rejected-and ejected-from his bar, April has avoided Slade’s and its surly owner. But Fate-and her book club-brings them back together and an inexplicable friendship is born. Matt encourages April to take just a taste of the wild life she’s been wanting and April brings her sweetness and sunshine to Matt’s grumpy little world.

Stepping away from expectations is never easy. Gossip, family ties and a big misunderstanding puts April and Matt’s relationship on the rocks time and again but they keep coming back together, both needing the connection they only find with each other. They could be headed for the love of a lifetime...if Matt’s secret doesn’t tear them apart.

About the author: Beth Donaldson writes because the characters in her head won’t stop bugging her to let them out. Her entry 'Carried Away' won The Rudy for mainstream fiction in the Chesapeake Romance Writer’s “Finish the Damn Book” contest for 2014. That win encouraged her to finish the story (now titled Something to Talk About) and keep writing about and all its characters. 'Just a Taste', released in December 2016 is Book 2 in the series.

Find this JUST A TASTE:

Email ThisBlogThis!Share to TwitterShare to FacebookShare to Pinterest
Labels: @b_don_writes, Beth Donaldson, Heart of it All Series, Just a Taste, Something To Talk About