The Winchesters of Legend Series! 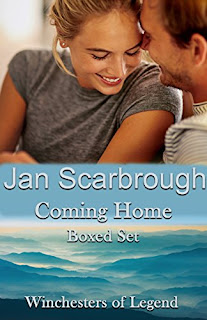 Small town, second chances—Coming Home: The Winchesters of Legend is a collection of novels set in Legend, Tennessee, a fictitious town nestled near the Great Smoky Mountains. Originally part of the Ladies of Legend series, these five stories by Jan Scarbrough are about the family, their lives and loves.

A Groovy Christmas (1968) - In a year where women are burning bras and men are burning draft cards, straight-laced Kathleen Fields wants to do something about being a virgin before it’s too late. When hippie Grant Winchester blows into town on his Harley, Kathleen decides he’s the perfect solution to her problem. Yet they’re from feuding families like the Hatfield’s and the McCoy’s. Can Kathleen and Grant reconcile their differences and find love in Legend, .

Not Quite Christmas (1969) - Accountant Frank Smith doesn’t want to go home for Christmas, not after he was dumped by his long-time girlfriend on Christmas Day a year ago. Avoiding Legend, , is high on his priority list until he meets his mother’s houseguest—hippie chick Emmy Johnson, a girl with a past . . . . and maybe Frank’s future.

The Reunion Game - Pickings are slim in Legend, , until a high school reunion gives thirty-something Jane Smith a second chance to exorcise the demon of Graham Winchester and get on with her life. Switching places with her famous and glamorous twin sister is just what small-town girl Jane needs to get Mr. Most Likely to Succeed into bed and out of her heart

Santa’s Kiss - Dawn Smith lives life on the edge, seeking thrills, changing herself into someone else. That’s why a small-town girl from Legend is superstar. But Dawn’s world is crumbling. She needs to get away from the bright lights and heartache, but it is Christmastime. There’s no way she can face her family this year.

Heart to Heart - Struggling to save his cash-strapped company, Jeremy Hamilton is overjoyed to discover he’s the heir to his great-aunt’s estate. Until he discovers there are strings attached. Not strings so much, as tails. As in six cats who belonged to Ms. Addie and who will determine just how much of the estate Jeremy will receive and how fast. He does have one option if he wants to inherit sooner: move to the small town of , , and live in Ms. Addie’s house for one month while the cats get to know him.

“Legend is a small town that will remind readers of [Debbie Macomber’s] Cedar Cove and [Robyn Carr’s] .”