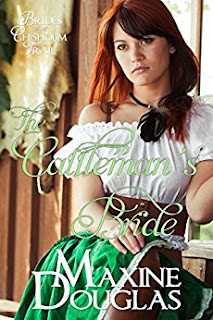 Suzanne Butler is saloon girl “Montana Sue” at the Lady Gay in who has been hiding from an arranged marriage for over a year. Word has reached her that the man she spurned is on his way to to reclaim her.

Cyrus Kennedy is a widowed cattle baron, expected to deliver his cattle to the stockyard in , make arrangements with a new housekeeper and tutor for his ten year old son. He didn’t expect a former feisty saloon girl would be going back to with him.

Will Suzanne be able to shed “Montana Sue” and avoid an unwanted marriage? What will Cryus’ men and his boy think when he brings the red-headed Suzanne Butler home with him along the ?

“As with any book by Maxine Douglas, this one pulls you right into the old west.”

Email ThisBlogThis!Share to TwitterShare to FacebookShare to Pinterest
Labels: @waMaxineDouglas, Brides of the Chisholm Trail Series, Maxine Douglas, The Cattleman's Bride, western romance, What are the best western romances?