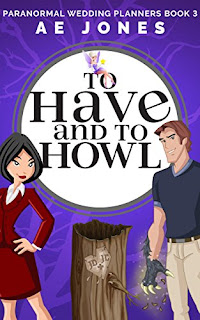 Julia Cole is a lawyer on a mission. After three long years, her husband’s murderers have been convicted. Until their leader breaks out of magically-strengthened, impossible-to-break-handcuffs in the courtroom, that is. Someone is helping them. And that someone is threatening Julia. But she will not back down from them or the man tasked to protect her...a man who scrambles her long-buried emotions.

Jack Dawson is a werewolf with a secret. One that could change his life forever. But his problems have to take a back seat while he protects Julia. He can’t afford to let down his guard—against the evil forces threatening Julia, against his growing feelings for her, fighting to be heard, and against his secret—which could destroy everything.

Can Julia and Jack finally let go of their pasts and begin a new happy ever after together?

Email ThisBlogThis!Share to TwitterShare to FacebookShare to Pinterest
Labels: @AEJonesAuthor, AE Jones, the Paranormal Wedding Planners Series, To Have and To Howl