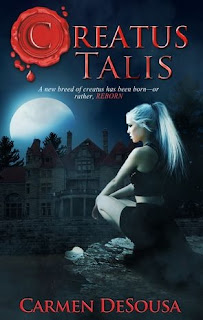 For four thousand years, creatus elders have insisted that the creatus population concealed themselves from human beings because humans had hunted the creatus almost to extinction...

But one woman's research reveals that when creatus first arrived on this planet, humans didn't fear the alien beings that looked so much like the human race. That is, until the creatus started to breed with humans, creating a ferocious killer feared by humans and creatus alike. A creature so fierce that its legacy of death and destruction has fed nightmares for millennia. And now, a new breed of creatus has been born — or rather, reborn.

Vev, one of the first generations of creatus talis, finds herself torn between her younger family members and a forbidden love as she fights to save the young talis from being turned into a weapon — or worse, annihilation.

Click Here To Add Creatus Talis to your Goodreads Shelf