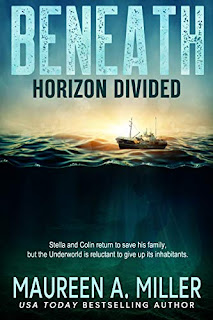 In this exciting sequel to BENEATH...

Stella and Colin search for the rogue Atlantic current that dragged them to the shadowy Underworld just a few months ago. With an ill-defined area to explore, their futile attempts cost too much money and their resources are running out.

When it appears that all hope is lost, a miracle occurs in the form of a retired producer-turned-explorer who is willing to use his ship and equipment to support their quest. Although no one believes their tale, he is the most accepting person they have met. Whether his intentions are honorable or not remain to be seen.

With a crew full of skeptics, Stella and Colin locate the downwelling current, and once again find themselves dragged into the subterranean network of caves deep in the canyon.

Time is running out for the Underworld, though. Will anyone be left to rise from beneath?

Look for Book 1 of the Beneath Series:
Beneath

Enter the Rafflecopter for a chance to win
a $10 Amazon Gift Card and a Beneath T-Shirt!

Email ThisBlogThis!Share to TwitterShare to FacebookShare to Pinterest
Labels: Beneath, Horizon Divided, Maureen A. Miller